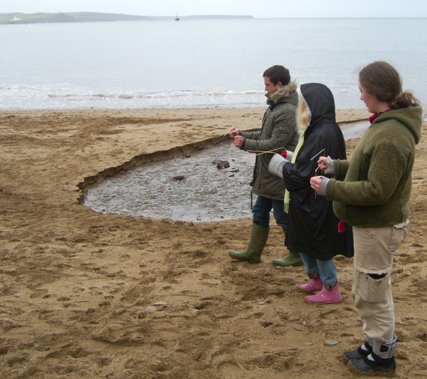 Did you ever wonder what it is that makes a place into a sacred site?
Why is it that some of the abandoned churches that are in ruins have more "magic" in them than all of the shiny new churches put together?
Why was it that our ancestors who built their temples on the high mountains seldom built them on the highest spot but instead built them off to one side of the peak?

This is the type of stuff that has no left-brain logical answer. I would suggest however that there is an intuitive right brain answer. It has to do with magic, not pulling rabbits out of top hats but real magic; "the science and art of causing change in conformity with the will". This type of magic is not for personal gain but for common-unity service. There is little chance of connecting with this knowledge in the cold analytical scientific logical left-brain laboratory of modern science that has dominated thinking to the exclusion of intuiting. When you move into Spirit "you are this knowledge", but you are suffering from a lifetime of dogma and programming from those who would have you as an ignorant slave.

Now I am not promoting conspiracy theories here, it matters little whether there is or isn't a conspiracy, but throughout all of your life you have been focused to fit in with system. But the mere fact that you are reading this short essay suggests that the programming is breaking down and you have become a seeker or that you are well on your path to the Light of Truth. Without going too far in to the mechanics of scared geometry it must be understood and held as a starting point for a journey back into the Light that it is the Aura that has a body. It is not the other way around, that the body has an Aura. This is a bit like the geocentric astronomy of the dark ages; it all depends on exactly where you are looking from when you ask the question!

Today we all know the earth circles the sun, but only a few hundred years ago you could be tortured to death for holding such a perspective. But even today's heliocentric awareness is contaminated by the understanding that the sun rises in the east, when in truth the sun does not rise at all but that the earth turns from west to east to receive to energy of the sun. But maybe this is too deep or too high or seems like it’s going the wrong way! Seven subtle layers of energy condense into an Aura to hold your physical body. Your body is mostly water, i.e. over 90% of your head and 75% of your body is water. You actually live on a water planet, that is to say over 70% of the planets surface is covered by water and Mother Earth is alive just as you are because of this living water. Water has an Aura or is it the Aura that has water? Enough, lets not get too philosophical in our left-brain, lets get back to the idea of this essay - Divining Sacred Sites.
The special places are special because the underground streams cross and release concentrated lifeforce energy to the surface, these places are never where you think they should be - like on the highest point of a hill - but always where the underground streams cross and release life force energy. There is no single word or name in the English language for this lifeforce energy, but today we know of it as Prana, Chi, Od, Odic force, Bions, Orgone, Ether and every old language has its own names, in old Irish it is known as Re and the Earth energy is known in old Irish as Neart. The divining technique taught by Celtic Druid Temple to its members uses brass L-rods and progresses to using hands and fingers to feel these subtle energies from the underground streams at the sacred sites. This system assists you to develop your psychic skills and intuitive abilities at safe and uncontaminated sacred sites. This is exercising your psychic muscle, first we help you to wake up a dormant ability and then we help you to train that ability and then you must practice. This type of activity boosts your Aura because you are trained in an enhanced Aura of a Sacred Site. The entire teaching is based upon not thinking and I ask you not to think about that! This is because it is the non-thinking side of the brain (i.e. the right brain) that is used for intuition, love, divining and meditation, love and healing.